Behind the scenes of Amour Cruel

I’ve been overjoyed by all of the love for the Amour Cruel videol. Thank you all for watching and sharing - it means so much! Many folks have been asking “did you film in Antarctica? Greenland” and “how on earth??” so I thought it would be fun to do a little behind the scenes story about how we made the video. Keep the comments and questions coming!

My family could tell you many stories about how I have ruined family holidays with art projects of all sorts. Easter 2017 was no exception when I enlisted friends and family to make the video for Amour Cruel.

I had no plan, but I had a vision: me, in a giant red dress floating in the middle of a lake. I had never done anything like this before, and in retrospect, maybe that was a good thing as I had no idea what I was in for!

April 9th - pick up the Sony a7sII and deliver to Yves

April 14th - pick up the drone

My folks live up in New Hampshire on a beautiful lake where I knew the floating dress scene could take place - an epic spot for a music video shoot. Location- check!

Yves Falanga was planning to be there over Easter weekend - a multi-talented awesome extended family member. Yves is one of the top medical researches out there (check out this recent article of his), but can pretty much do anything. He's also one of the most positive people I know. I saw him in New York the weekend before and he was down to shoot the video with one requirement: we get a drone. I rented one from KitSplit and a camera from CSI rentals and we were ready to begin the adventure. Co-director and director for photography - check!

So one week later, a DJI phantom, Sony A7Sii, me, Nick, and friends Jeff and Alejandra all piled into my tiny yellow Mini Cooper and made the 5 hour drive to New Hampshire...with a 15 foot red dress piled on top of our laps and light reflectors blocking any interesting view. I make most of my concert dresses, but this was unlike one I'd ever done before - 15 feet in diameter, the dress was huge...and heavy. OMG, walking in it was not a possibility and traveling with it spread across my and Alejandra's laps is not recommended! But...costume - check!

My family is large, 4 daughters, and 4 dogs (yes my parents replaced us all as we left the house) but what you need to know is that for us, family is usually many more people than that - a beautiful extended network of people who have become family over the years. I can't think of a time at home when it was just my immediate family...this Easter weekend was no different and every person would be needed.

My concept was this: two characters - one in a red dress, and one in a silver dress. The red dress would be fierce - telling the story, and the silver dress the one experiencing "amour cruel".

White dress outside in garden

Bathtub scene (omg...yes we did a bathtub scene...safe to saw that was cut!)

Red dress in front of fireplace

White dress nighttime on the stairs

Boy did this change pretty quickly. On Saturday we got off to a great start - we completed all of the white dress scenes, bathtub scene, the dressing room scene and dock scene without too many hitches (we may have managed to create all sorts of floods in the house by using way too much bubble bath...oops).

The big scene of the day was the "feast scene". I had imagined we could recreate one of those amazing renaissance food paintings - but as a living tableau. My mother is a professional chef and I had tasked her with getting a pigs head that we could roast and use as set decoration (doubling of course as a sweet easter breakfast the next morning.) And she went all out. Not only did she get the pigs head, but also a lambs head which she and Jeff cooked and styled to look so creepy! We placed them on the dinner table and surrounded them with the most colorful fruits and vegetables we could find. It was kind of amazing. Filming was crazy - I could hear my father giggling in the background, my sister saying as many things as she could to distract me - and dogs running around very excited by the giant pigs head on the table. Unfortunately this epic scene didn't end up making the video (more on that later) but oh man - it was fun to film! 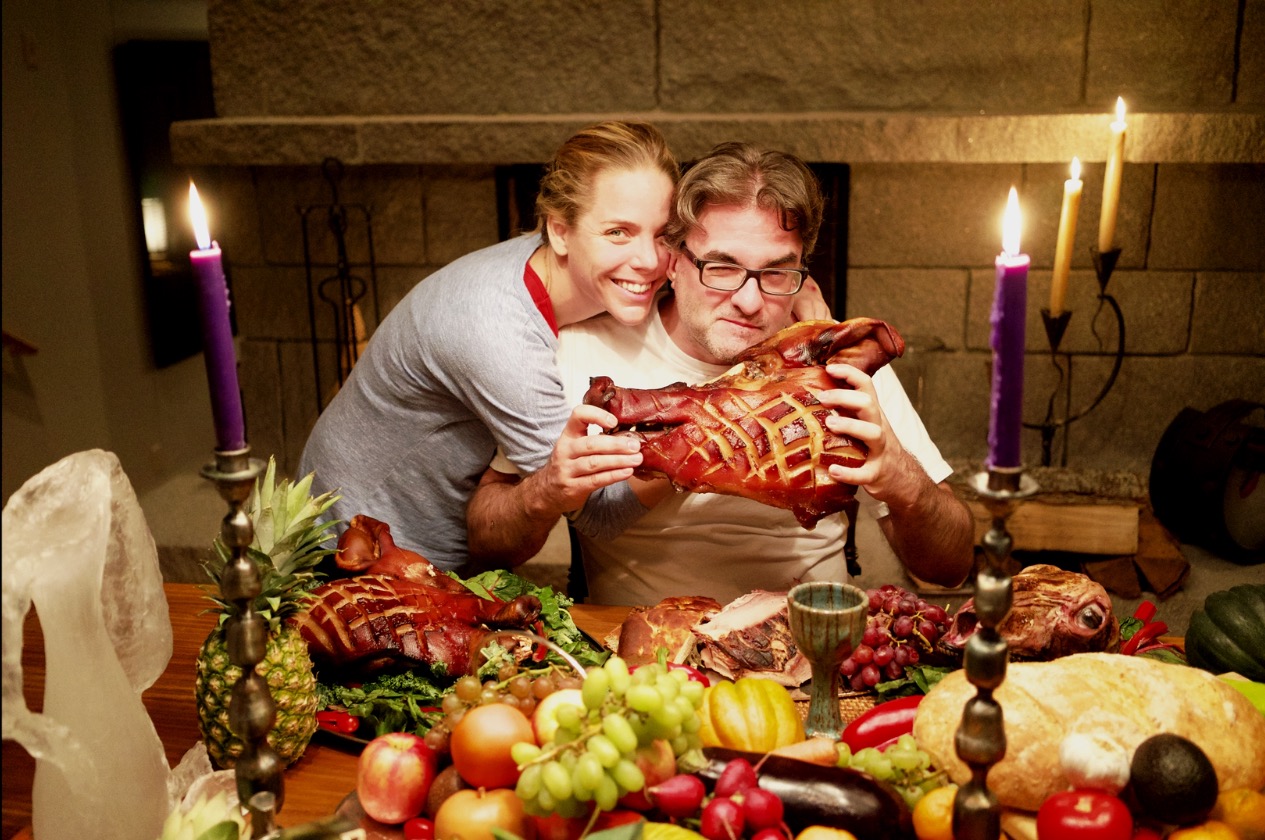 We finished up and were ready to move to the final big scene of the day: red dress in front of the fireplace with dogs. Now I think they say never to work with animals or children in film...oh boy, that is definitely true, though perhaps they should add fire to that list as well. For the first time in years the fireplace decided that the flue wouldn't open, so as we lit the fire smoke came billowing back into the house. Nerves and tensions rose and my father (video boat captain and fire maker) shut down the fire option. We would have to improvise this scene. Instead of being in front of the fire, I would be "surrounded" by fire - well, surrounded by the red dress. We spread the dress out all over the floor so it looked like I was lying in a sea of red. Jeff, Alejandra, and Nick held the light reflectors to create a warmer color and we got one of my favorite shots of the video - completely by accident! We even added the dogs to this shot (they unfortunately didn't make the final cut) but after some clever liver treat coaxing from my mother, they lay down so beautifully. Check out this shot with them that didn't make the video.

April in New Hampshire isn't the spring flowers and bunny rabbits that most people think of over Easter weekend. It is still cold, often snowy, and the lake usually has bits of ice floating. On Friday night when we arrived, the water in front of the house had melted, but the shallow bays nearby were still full of ice. We spent all day Saturday working, filming late into the night and woke up the next morning to the most epic sight: the ice from Wolfeboro Bay nearby had drifted over and had landed right in front of the house. We had always planned to shoot the floating dock scene on Sunday morning, but now, nature had given us the most amazing gift ever - our very own iceberg flow.

We rushed down to make it all happen before the ice disappeared...I jumped onto the floating dock and Nick pulled me out into the ice-flow in a a kayak (so cold!) Jeff, Yves, and my father hopped into the tiny Boston Whaler - my father driving, Jeff operating the reflectors, and Yves the camera - we knew we had something special but were blown away when we got back and saw the footage we captured with the ice - our very own Planet Earth!

As first timers at shooting a music video, there were many surprises. The ice scene changed everything and completely restructured what the video would be. We ended up shooting much more material than I ended using in the video, but when we got the ice footage, it became so obvious what direction the video should take and as a result so many of our scenes got cut.

This was certainly a crazy endeavor, but so much fun! Here are some of my tips for first timers:

The weekend was exhausting, but amazing. I had the best crew a girl could ask for: Yves on cameras, Nick on pretty much anything we asked him to do (float pulling, iceberg positioning, bubble baths, you name it), Jeff's keen eye on lighting and scene design, Alejandra on hair, makeup, and direction, my Mother on food and dog handling, and my father as chief boat captain. My sister Sophia and her boyfriend Paul kept the drinks flowing.

Sifting through the material was a job of epic proportions. I finally realized why people outsource editing and color grading, but...I have a problem - decided to do it myself. After many many iterations I am so happy to finally present Amour Cruel, the video. So many thanks to the folks I've shared it with who gave me many wonderful comments: Patrick, Paul, Mia, Deja, Juan, Anthony, Mike, Peter, Julia, Doori, Rami, Jenny and many more.

A Ferguson family production for sure.

Watch the video again below!

Best of the Bay: Voices of Music